Losses from natural catastrophes, including severe weather, are on the rise around the world. Heat waves are becoming more frequent, causing sea levels to rise, which is boosting the risk of storm surge and intensifying the damage done. This may come as no surprise. What might surprise you is just how wide the floodgates have opened on Canadian business owners in recent years, and what role extreme weather insurance can play today.

Natural catastrophes are increasing, and their financial impact is climbing. In 2017, catastrophic losses accounted for about $1.2 billion in Canada; there was no major ice storm, fire, or flood to drive up the sum of catastrophic (CAT) losses, but rather a string of smaller losses across the country. However, there’s one emerging pattern to note: floods and water damage are leading the pack in terms of frequent and costly claims.

As Kenn Lalonde, chair of the Insurance Bureau of Canada (IBC) board of directors asserts, “A good chunk of [the] $1 billion in insured CAT losses is a result of water damage and flooding.” This damage can’t always be traced to one big, wet storm, but rather it’s often due to sudden torrential rainfall in highly populated areas.

Events like the summer floods in Toronto are becoming more commonplace, and that’s largely due to surface runoff in our concrete jungles. Aging and inadequate infrastructure can’t always withstand the water volume that comes with a flash flood or snow melt.

Impervious surfaces encourage rapid water runoff, but at different scales. For instance, brickwork converts 9% of received water into runoff, while concrete rapidly converts between 69% and 93% of water into runoff (depending on the inclination of the surface). In a massive area of roads and sidewalks, a big downpour tends to collect on the surface instead of sinking into the ground – and from there it can run over thresholds, into basements, and even out of burst pipes. 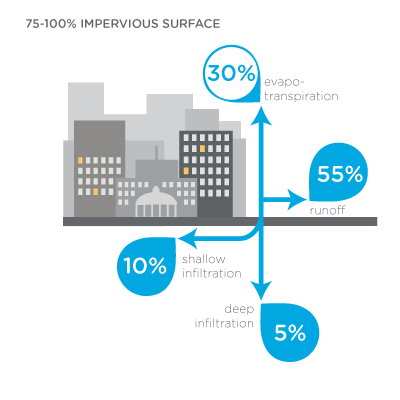 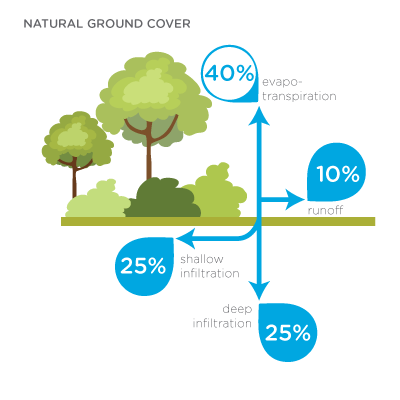 What’s the cost for people, property, and businesses?

A good chunk of the $1 billion in insured CAT losses is a result of water damage and flooding.

Whether you’re at risk of tsunami from seismic activity on the west coast, you’re prey to Atlantic hurricanes on the east coast, or you’re caught in an urban centre with little natural drainage, water damage can come quickly – and bring a big price tag.

In 2017, spring flooding in Ontario and Quebec caused over $223 million in insured damage; late August flooding that year drove damages over $124 million in the Windsor region alone. Stewart Woo, SVP of corporate risk at Northbridge Insurance, contends that it’s important for insureds and their insurers to acknowledge the new reality:

“In 2017, estimates suggest CAT losses total $300 billion or more. It’s important to recognize that we’re susceptible to CAT events, and make sure that we’re working within appropriate risk guidelines and continuing to advise clients on risk mitigation.”

In fact, CatIQ Inc. reports that insured losses in Canada topped $1 billion five times in the past seven years. The bad news: as population density continues to rise in Canada’s cities and weather gets more extreme, losses are likely to rise for everyone. The good news is that there’s coverage to help protect and recover if your business is unfortunate enough to suffer major water damage.

Extreme weather insurance and your business

Even though extreme weather patterns are more robust than ever, and risk for insureds and insurers is spiking, the insurance industry has generally been slow to react. A report from the University of Waterloo indicates that insurers simply aren’t keeping up: most insurance companies aren’t accounting for the increasing frequency and severity of weather events. Not only does that mean insurers are hurting their own bottom line, but their lack of adaptation and innovation could come full circle to hurt their insureds, too.

Protecting your business assets and professional success calls for more than insurance coverage; risk management is at the heart of any effort to reduce damage and recover from catastrophic weather events. An appropriate insurance policy will account for your risk – of natural disaster as well as more common challenges – but also give you the tools and guidance to actively reduce your risk.

Decades of commercial insurance experience and a commitment to innovation has allowed Northbridge to compile a holistic insurance solution for each Canadian business owner that speaks to their industry, their priorities, and their unique risks. If you’re not sure how your business will weather the next storm, it might be time to speak with our brokers about shoring up your defenses.

Ready to get started?

Connect with us now